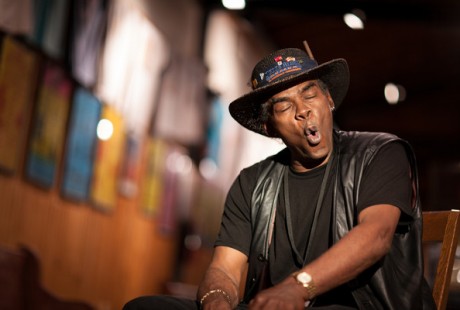 “I come from a long line of moonshiners,” laughs Bill “Howl-N-Madd” Perry, adding, “I have a lot of bad habits, but drinking is not one of them.” Growing up picking cotton in Mississippi hill country, Billy Joe Perry moved to Chicago to make a new life for himself.  But his real success came when he returned 40 years later as “Howl-N-Madd,” an engaging bluesman devoted to his music and his family. Candid interviews capture the captivating personality of this talented blues musician and also reveal the struggles integral to his compelling life story.  Perry’s determination to rise above the constraints of southern poverty and racism and to live a life entertaining others through his music has inspired audiences across America, in Asia, and Europe. The film celebrates Perry’s musical career by highlighting magnetic live performances, from deep in Mississippi up to the Terra Blues Club in New York City, featuring Bill, his son Bill Perry, Jr., and his daughter, Sharo Perry.  And it shows how Pauline Perry, who is unflagging in her devotion to her husband, embodies the spirit of the song he wrote for her after 45 years of marriage, “Delta Women,” who, as Perry sings, “know how to shake that thing.” (27 minutes)

Assistant to the Directors: Alannah Fehrenbach