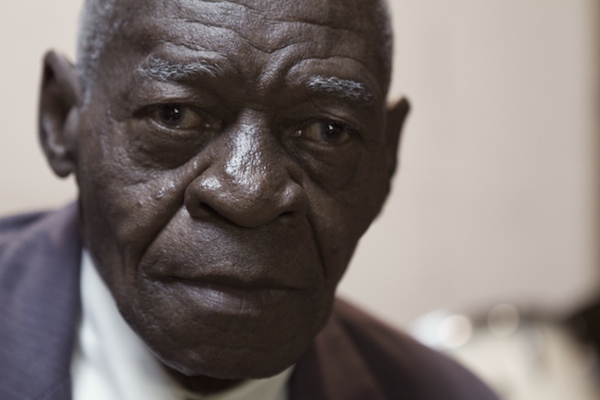 “The Dapper John.” Mississippi bluesman Johnnie ‘Mr. Johnnie’ Billington was never without a suit and tie. Smartly distinguished was his look. Billingtion’s name was typically part of any conversation about educating the next generation of blues musicians or as the tag-line of our film reads, “keeping the blues alive” in the Clarksdale region. So in August of 2010, on a 90-plus degree day in the ‘Sip, the “True Delta” team and I drove to meet Mr. Johnnie for an interview at his building in the tiny town of Lambert in Quitman County.

The building, in the center of town had a vast open space with wood-paneled walls and stage where Billington, the teacher, used to give young musicians instruction in music and their rich Delta heritage. There also wasn’t a hint of air-conditioning in that room. While every ounce of moisture in my body was rapidly evaporating and I subsequently began to wilt in the oppressive heat, Mr. Johnnie – “the Dapper John” – didn’t break a sweat. Work in the cotton fields under the Mississippi sun as a child may have cleared the path for that cool resolve. Lengthening my sentence in that air-conditionerless room was Billington’s “interview-style” — a direct question was often met with a parable or a story that followed a path as winding as the state’s dusty back-roads. However his history, his gravelly voice with its lilting southern drawl, his easy smile, his peculiar mix of wit and wisdom flavored with a bit of contrariness made for a colorful adventure.

I last saw Johnnie Billington in August of 2012 at a screening of “True Delta” during the Sunflower River Blues and Gospel Festival. The film was followed by a panel discussion we arranged titled: “The State of the Blues” with True Delta’s writer, co-director and co-producer Lee Quinby, Roger Stolle, Jim O’Neal, Dr. Luther Brown, Carol Marble, and Reverend Matthew Terrell of Bell Grove Baptist Church. James ‘Super Chikan’ Johnson ended up being a no show. In any case, Mr. Billington, of course in a suit and tie, was frail, struggling a bit with his balance and softer-spoken. So when I saw Roger Stolle’s tribute, I was not so much surprised as I was saddened by Mr. Johnnie’s passing.

His name adds to the roster of iconic music makers, innovators and torch-bearers who have died since Lee, Daniel Cowen, Michael Scanlan and I began this project in 2010. Foster “Tater” Wiley, Big Jack “The Oilman” Johnson, David “Honeyboy” Edwards and Melville Tillis are all people we had direct contact with. Other passing blues legends include: Joe Willie “Pinetop” Perkins and Hubert Sumlin.

Billington’s reach extended beyond the blues. For years, he gathered together groups of young, local, black kids, to instill in them pride and teach them life skills, like how to dress, act, play the guitar and how to fix lawn mowers. The bluesman and his method of teaching were partly the inspiration behind the creation of an after-school apprenticeship program run by John Ruskey’s Quapaw Canoe Company for Clarksdale youth and the Lower Mississippi River Foundation.

Here is a story I did for CBS News about Billington: