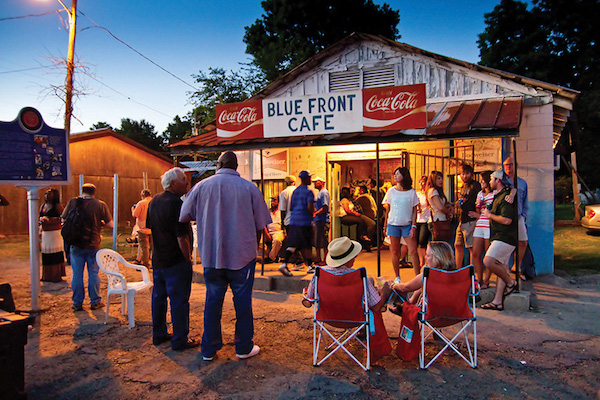 EB and I drove south down HWY 49 out of the mid Delta flatland, passing early abundant cotton and shaded pecan. Another15 miles out of Clarksdale we passed the Shack Up Inn, once a cotton plantation, now another blues revue; in reality a Potemkin scatter of sharecropper shacks fronted by manicured cotton, presenting an incoherent aesthetic of Delta blues. A few miles further on we passed a gleaming private prison complex, overflow from California we were told, and then settled into our drive: 2-3 hrs along highway 49, through Greenwood, Yazoo City and then into the hills west of Jackson, on the outside edge of the Delta-proper. We were going down to Bentonia to meet Jimmy “Duck” Holmes, 2nd generation proprietor of the famous Blue Front Café and the current gatekeeper of the Bentonia Blues. We hoped to get an interview and listen to him play a little, EB would interview and I would photograph. Three days earlier, we were delayed coming down from the north due to inclement weather and the usual airline runaround. With EB cancelled out of New York and I cancelled out of Chicago, we missed our first chance at an audience with Mr. Holmes, but he said come down when we could, so off we went after three days in Clarksdale meeting its wonderful people.

On the phone, Jimmy had mentioned something about getting some ‘gas money’ – that then he could sit for an interview and even play a bit. We had delayed getting cash until Bentonia, thinking we’d find an ATM easily enough. But when we arrived in Bentonia at mid-day the bank was closed, so we dug through our pockets and found thirty dollars between the two of us, promising him we would get more when the time came. Sitting in a slant of sun at the table just inside the door of his café, Jimmy “Duck” Holmes eyed us skeptically. His look, such as it was, coming from behind blacked-out shades, said plainly enough that he’d rather not suffer any bullshit on a Monday. “I’m a little ticked off,” he said, “you two are three days late.” “Two!” We protested, “Only two days!” “It was the airlines!” we cried.  Jimmy just stared back, a study in perfect stillness, diligently unmoved. Suddenly, I felt the whole thing slipping away, and that would’ve been a shame because, my God, The Blue Front café, the light in this place, the man seated before us, it was a gift from the photographic gods. And we dearly wanted to hear him play. The Bentonia School, as it is also called, is a singularly local blues: combination of minor chords and open tuning, with a particular return to the drone, its formal simplicity conjures the much deeper complexity of a Delta mind exploring the haunted spaces of its tradition. Coming from Chicago, it is the direct opposite of that anodyne canon of festival-blues so over-consumed in the industrial North. And here we were in the Deep South, two days late and a few dollars short, getting the stare down from one of its last living practitioners. We all sat in silence for a bit, taking stock. The Blue Front was empty but for two early customers sitting out in the shade of the front porch and Jimmy’s helper, Nookie, going back and forth from the kitchen to the bar.  In the back corner by the jukebox I noticed a beat up guitar propped against a small amp, a mic stand nearby and another slant of sun from a side door lighting the scene perfectly.  We sat again in silence before, ever so subtly, I saw the hard lines of Duck Holmes’ face form themselves into a slight but welcoming smile. Arms unfolding from his chest, he slid the shades up from his eyes.  “Why’d you guys come all the way down here?” We want to learn about the Bentonia Blues!” Said EB. “Alright,” he said. “But it’s gonna cost you some gas money.” EB dove into his bag for his recording device and I began setting my cameras. Here’s the rest of the story: